The history of classic subcultural tribes 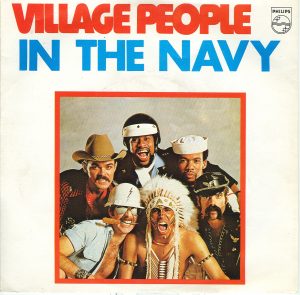 Remember disco kings The Village People from the late1970s?

After Bowie, Alice Cooper and Ferrys androgyny glam rock posturing made even suburban boys wear fey feminine styles and makeup, The Village People inverted the transmission of style between boys: they cloned the most macho cliché styles: the soldier, the fireman, the cowboy and the sailor – and reinvented them as gay fashion icons, causing mass confusion. Gays suddenly looked MORE male than hetero ́s…subtly using uniforms as gay fashion inspired a lot of polysexual men.

They wanted to roam the streets and mingle, looking for pray everywhere freely, not only inside the homo subcultures. The Village people slipped under the gaydar back in the 70 ́s selling their “In the navy” anthem to the homophobic US navy and a Christi
an organization bought the YMCA track for an advertising film.

Generally, you dress to look rich, sexy, clever…or dangerous… Remember the teenage rush of scaring off strangers in public wearing a hoodie or evil combat boots? Faking you are in a scary uniformed tribe and pretending to be running the corners in your hood like a mobster to get relief from a monotone reality? 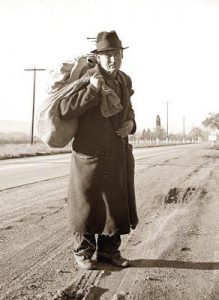 FLASHBACK: The Village people inverted that logic. Before the 2nd WW, dropout youth drifted – like a white equivalent of the rasta, fueled by snaps and the saddu-like power of being outside the materialistic trappings and games of the ruling bourgeoisie. Decorated in army regalia, fox ́s tails and with the trademark blue coffee can for begging, the  and wandervogel was fucking around on the outskirts of society in a never-ending nomadic bender. Some homeless people still wear that classic look, but it still have to reach the mainstream…(Henrik Vibskov take note). After the extremely gay and uniformed 2 world war — (what happens to a mass of young guys crammed in small sweaty spaces on amphetamines waiting to die a long way from home…?) Hollywood stroke back and transmitted a new male nihilistic/materialistic subculture to counter a potential communist takeover: the rock roll styles inspired by black slave culture and gay bikers. Suddenly Europeans dressed not only like Edwardian teds or imitated a smooth young Marlon Brando: the start of a new attitude where males dressed up as wannabe movie stars, beyond functionality and not only as their work-defined social status dictated. 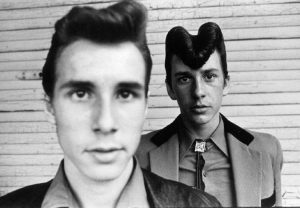 The mods had a new sense of sensual playfulness and enjoyment of consumerism became mainstream.  Italian movies – as well as Motown and blue beat records – soon made Americana obsolete, as clerks and rent boys dressed as Italian scooter-driving film stars, lifting looks from Jean-Luc Godard, François Truffaut,”Blow up” and Jewish bankers sons in short sharp tailored mohair suits and parka coats – as a secret mini modernist army outside the mainstream – staged amphetamine-fueled epic battles in Brighton against the – now anachronistic – rockers and greasers and boredom and authority in general. Girls were reduced to mere spectators or props, as males dressed up to outsmart each other and stand out as peacocks desperate for a superior individual version of the same strict template. 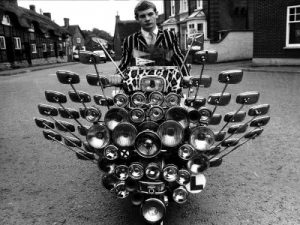 A non-conscious closet-gay scene of drugged blood- thirsty eunuchs. But as hippies, pot and acid broke in 1966, the so called “mod movement” was split into a arty farty Bowie segment, all paisleys and feather haircuts, contrasted by a more tight minimal hardcore working class football orientated look…the skinhead was born. 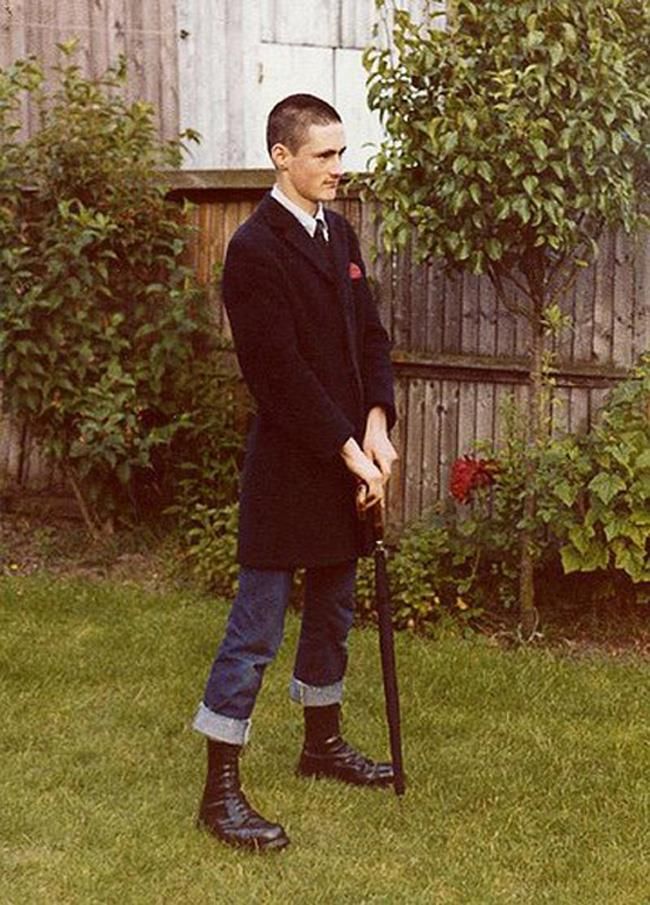 Like Hugo Boss ́s uniform designs for the Waffen SS, the skinhead uniform gave even a small tiny man a mean and powerful look. The genius director Stanley Kubrick even envisioned a futuristic skinhead lifestyle in his comic masterpiece, “A Clockwork Orange”. 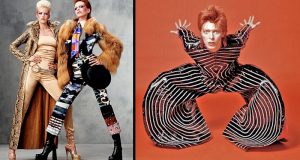 The happy modernist faith in progress – exemplified in the space race – died with the oil crises in 1973 – riots, mass unemployment and the end of the modernist utopia. Things got even tougher on the terraces, until proto-postmodern punk cleared the last of the ugly hippie fake dream hangover from the dirty lame Woodstock generation.

Inspired by gay glam icons and rockabilly, punk took the situationist art group ́s idiom of the “society of the spectacle” to heart, married it to a deconstructive magpie collage anti style with a fondness for anarchy, SM and playing with a fake nazi pose, and stepped up the game with anti aesthetic nihilism celebrating the artificial world—- making the general public uneasy in their reflection of the brash realities of late 1970s decay and broken dreams. “No future, I don’t care” scare tactic look, that even today is a cliché white man ́s equivalent of the dropout slacker Rasta, turned everything around, masterminded by the cash-strapped couple Vivienne Westwood and Malcolm McLaren from a 100 square meter rat infested shop in the Kings Road. (Startup entrepreneurs take note, ideas and timing can change the world)

Soon a lot of advertising and fashion people tried to exploit the punks, and socialist youth organizations tried to politicize the anarchists but the fascists countered by organizing and funding the “Oi move
ment” – probably via journalist Gary Bushell – a simplified neo skinhead hooligan storm trooper tribe, that took the non-racist ska-loving stylish skinhead look and turned it into the steel-capped, skull-head, bomber jacket wearing yob in tight skinny bleached jeans that is hated and feared even today — and still exist in eastern Europe. Riots in south London followed, and the whole Oi movement had to go underground again, getting even more extreme with bands like Screwdriver.  See “This is England” for further details and music and style tips. On the surface a very hetero scene, but girls were extremely rare, the sexual urge repressed and turned into ultra-violent laddism. Another problem was that due to extreme violence at matches, skinhead hooligans where forced to dress as preppies, traveling business class to avoid detection to get into matches. The casual style was born, a mod-like race for the newest “clobber,” mostly expensive European sportswear brands — a clean uniform that could only be detected from those who knew the codes inside the gangs. 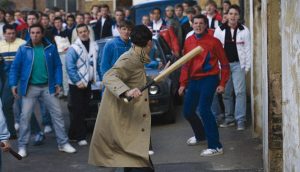 A brand or cut of shirt could show your loyalty to a firm, and could mean life or dead. As the top boys and “faces” gear was detected and copied, a never ending race for expensive gear from CP. Company, Stone Island and Prada and other brands — normally associated with upper-class hunting and sailing activities — where often stolen on tours following your fave team around Europe. Like mods, the casuals where wolfs
in sheep’s clothes. An even more evil twist came when Casuals United, as British anti-Islamic protest group formed in 2009. It is closely affiliated with the English Defense League, a far right street protest movement. 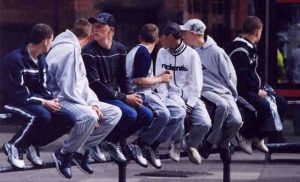 The casual style lives even today, as the preferred football supporter style, but due to cheap surveillance cameras the more anonymous, uniform, hooded, masked look developed, inspired by anarchist rioters and squatters. The latest is anti detection wear by Adam Harvey, who even claims to jam GPS phone tracking. Mixed with the originally black b-boy inspired skate/street wear look it was the dominant thug and youngster look and the chavs took it to the extremes, complete with crappy fake logo mania and Burberry mania until the Williamsburg hipster cliché came into this post-post modern internet based mix in the 2000s. (The internet killed al authenticity, as everybody could copy and buy any look at the flick of a switch.) 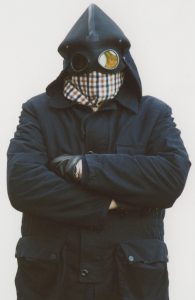 These violent almost non-sexual subcultures were appropriated by London gays, who first took the skinhead look and turned it into their own in the 90s, and director Bruce La Bruce even made a movie about it, “Skin flick,” a deconstructive inversion of a sub cultural uniforms value set, later imitated in films where a homophobe Eminem-lookalike is fucking gangs of well hung black hip-hop guys. And as gays continue to rule fashion, and gay aesthetics has dripped down to even the most hairy hetero and turning him into a metro consumer, and the gayest rent boys are “straight-acting”, fucking heteros all around town, and even the crazy gay bashers of Reggae in Jamaica is wearing sleeveless pink euro t-shirts that would make even The Wire ́s super thug Omar blush, complete with makeup and skinny jeans, maybe the all the uniforms has finally lost meaning. It’s not the packaging, it’s that you pack, it’s not where you’re from, and it’s where you’re at now. We are all just narcissist boys in one big playground now. Fashion´s signs are finally empty – and fashion itself is shameful, stupid, anti-eco – like modern porn.

PS. The skinhead look – now emancipated from it´s heavy past – made to exact 1969 specs here. 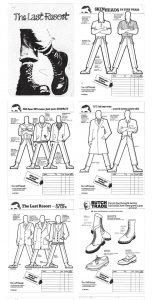