The Japanese drum machines that finally made the white man dance..

What is the skeleton that connects the multitude of up-tempo dance subgenres, known as house? Four heavy stomping bass drums pr. bar, beating in 118-148 beats pr minute – the lowest common denominator in music…

Part 1 :Flashbacks – Back in the ugly 80’s, when AIDS and complete nuclear destruction cast an evil shadow on a financially unstable world, a minor mira- cle happened. In the Land of the Rising Sun, visionary engineers from Korg, Roland and Yamaha made the hi-tech tools – previously solely owned by pretentious rock dinosaurs like Peter Gabriel and Jean Michelle Jarre – available for any hard working nerd or danc- ers bedroom. Now, clone the access to machines with a generation raised on post-punk and Moroders prototypical evergreen mantra- groove ”I Feel Love”, a strong influence from Kraftwerk and an urging need for a rebirth of disco. And POW! – House music was born.

Born to change any preconceptions of club music – and music in general – and spearheading a musical revolution that made even punk a tiny bump on the highway.
There was a longing for disco, a genre of pure joy, like soul without the lost love and race-issues. A pure motorically motivating muzak for sheer enjoyment. And as the reality of the 80’s sucked big time, there was a need for a new beginning, a musical utopia and a fore- cast of the technological revolution to come, with less gloom than the dystopian industrial scene.

House is post-production retro disco, where echoes and ghosts of the working musicians are reassembled in the digital domain to work out dancers. At first, the primitive 4-track cassette experiments from Chicago sounded crude. Like low budget templates for future music longing for its disco past. But when a gang of sci-fi fanatics in the deserted motor city of Detroit cued in to the more serious gloom strategies of European post industrial EBM (electronic body music) and twisted house into soundtracks for the future, the European producers in spe took note. 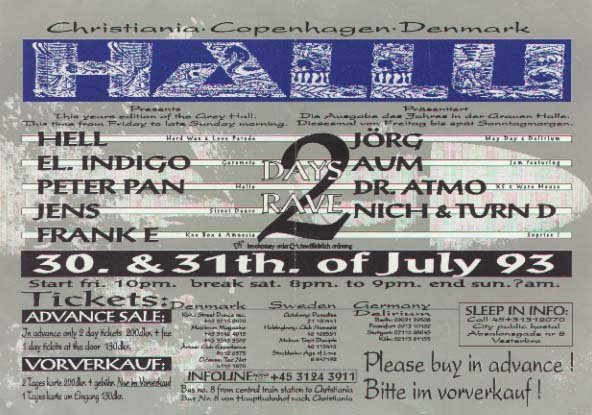 This was back in the days, when a DJ was a nerdy hobbyist fighting for rare import 12” vinyl, only occasionally leaving his room to hand out flyers and getting his five minutes of fame on the dope decks. Synths and beat boxes where generally considered bad taste, and not “real music” to most people, who didn’t care for the DJ’s taste and sync skills. They just wanted to hear the pop/rock hits from the radio or the funky pastel of the dockside clad Montmartre scene.

“If Pac-Man had affected us as kids, we’d all be running around in dark rooms, munching pills and listening to repetitive electronic music.”

Part 2 : Alone on the floor – As a DJ/producer always looking for the per- fect beat in the mid 80’s, I snobbishly shrug off house as poppy, gay, drug disco, fitness music, un- til my friends had a party with acid house DJ’s in 86’. Complete with strobes and pure MDMA.

Suddenly the dark coolness and speed/coke/alco- hol-menu combined with black leather and nylon gear and Front 242, Blue Monday and The Cramps seemed irrelevant. No more pogo or mating dance steps. Just dancing for hours with the whole room AND alone, to a never-ending Roland 808/909 beat.

There was no media, no uniform, no set of rules, and the records where few and rare. You just danced for days with strippers, hippies, druggies, and styl- ists – often just fueled from the power of the bass. A fresh feeling, and a new liberating post-post punk way to interact socially beyond the general norms. 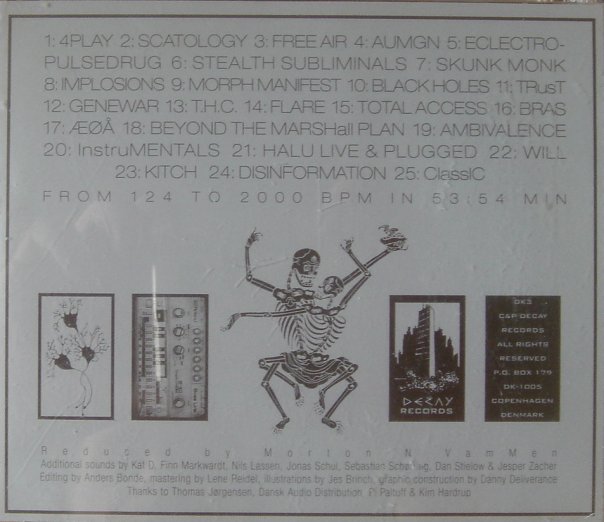 I was immensely inspired. So I made the first acid CD in Denmark: AUM/Morph – the title a typical indica- tion of the “fuck pop, we are fighting an information war on our own terms” ideas of the time, referring to the mantra of all sound and the quicksilver morph effects of the Terminator films. Several occult 12” singles on secret German imprints followed, along with a more breakbeat-orientated sequel CD: AAA: “Connoisseurs cornucopia”. Note the hermetic names and no photo style of the time “let the music speak for itself, fuck packaging and the star system”.The records made minds travel, and send me on a tour of the US and through studios and endless collabora- tions, eventually ending up making sounds for Lars Von Trier’s series “The Kingdom” – and Stimorol ads. A DIY house-success. 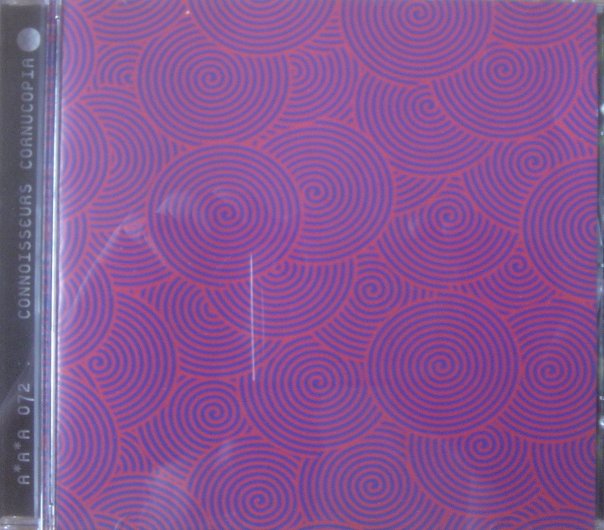 The innocent scene was soon exploited by pushers, media, entrepreneurs, stale radio personalities and ego-driven idiot DJ’s, and split into a neo hippie Goa fraction – the forefathers of trance, and a more mini- mal camp inspired by the Detroit/Berlin axis. Later on, a funkier UK inspired Jungle scene evolved in the squatted city of Christiania – all three subscenes existing outside the mainstream clubs and charts.

Then, around 1996 Eurodance arrived as the new pop, making 909 beats mainstream. The old rave crowd – as any hipster crowd – needed to stick out, so they picked more avant-garde IDM sounds, or threw themselves at more mature, musical house a la NYC deep house, complete with afro percussion, pianos and soulful divas – as if disco never died. The up-tempo big brother of hip-hop became a global virus, and electronic music was now the new club fodder, and Prince, E.W.F. and post grunge MTV styles died in the clubs. House was now used tosell everything to theyounger hipster segments.

Suddenly, making music was a matter of punching some drums on a grid and sync/discipline some sam- ples from your record collection on top and master the whole shebang with a clubshaking bassline. A world apart from the tedious rehearsal, live and studio rituals of ”real” music – and you could do it ALONE.

The Danes are not funky people, and as production before the laptop revolution required a lot of gear and a lot of time to figure it out, most producers made Eurodance, ambient, EBM or tech house. All a bit cold and blue, like most Scandinavian music. Danish tech house only bloomed after the rise of the Internet. The biggest contribution to the house cannon is probably the Nord company, respon- sible for some excellent analog-like synths, and especially the Propellerheads Reason software, which emulates all the expensive studio hardware of yesterday even on a modest laptop.

House music – as sample based postproduction music – has a weird evolution. On one hand its a complete underground niche music for drug dens, on the other hand its the new pop/rock, filling stadiums. Every time house seems dead, passé and overexposed, after Swedish House Mafia or David Guetta has brainwashed us via the airwaves with another gimmick tune, a bed- room producer finds a new old record to sample and a new evil bass tactic. Everything from Balearic clichés over tribal drums to Balkan has been tamed by the se- quencers and made into modern druggy march music.

Right now the new generations play around with black downtempo styles inspired by reggae, dubstep, boogie and hiphop rejecting “big brothers music” i.e. tech house – its subcultural context gone, its sign value empty, reduced to juice bar music made by vision- less attention hungry DJs desperate for bookings. But the downtempo trend will just build up the next up- tempo house backlash, like ebb and tide. Google the house blogs or beatport for further research into fu- ture beats. All combinations are possibly tried already.

And as DJ and studio technology merge on the laptop why not make your own? Music production and DJ’ing will likely end up as a kind of “Guitar Hero” game as you read this anyway.

This text is originally published in NORDIC MAN MAGAZINE.