A guide to Vammen´s “ISLAND” video 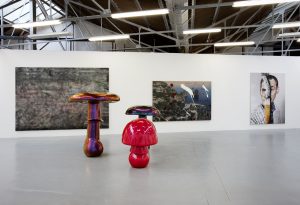 What´s up with that weird video Morten?

Art lover Mr. Frahm send the Island show concept, bang, that spurred me into action due to its utopia-questioning agenda, as I grew up where utopias were still a viable option, Freud and Marx were pretty big back then, then the more dystopian a-historic postmodern time came, more Blade runner, less moonwalk and Apollo the late 70´s was more nihilist punk, not hopeful mod/hippie-times. To state anything utopian apart from endless growth was/is considered naive now. There is no utopias anymore, people are just in a stressed and depressed state now after the crises, and that put them into a more security-seeking mindset, a non-utopic dreamless state, or, they simply imitate other peoples dreams, sampled from media and advertising, living in the spectators eye instead of living based on internal more intuitive feelings. It’s a panopticon jail of spectatorship. Maybe fashion and technology is the new utopias? Boring… 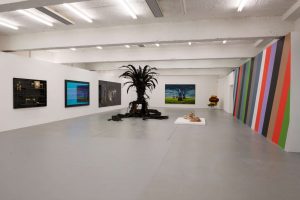 The most simple, poppy yet universal utopia is the girl on a deserted island, like in the teen blockbuster, The Blue Lagoon. I made this but in a dried out, washed out aquarium  as video art often is a kind of aquarium, but chose not to use electric light, grading, makeup or afterFX and Canon cameras to avoid a fashion/commercial/music video  look. At first I tried very beautiful african model, due to my love for afro-futurism, but it added a kind of geopolitical cliché edge that overshadowed my intentions, and the  collectors and audience would probably project a political agenda, or think about Grace Jones or escorts. Too much noise. So I chose an old friend I just know hits a more arty crowd, the model/actor/artist/Ziggie Bruhn. She said: “It’s not fashion? Art, hurrah let´s get naked”. I was flabbergasted, but remembered an old artist friend who told me: “when in doubt, paint erotica, the collectors love it”. I hated the tits, but what the hell, Im having a premiere at the Dairy so its kind of a legit meta-joke.

When I was 5, I used to upset my parents by freezing flies down and glue small wired flags  to them they then flew behind them when they reanimated in the heat. I had some Reiyle- like foil, but I could not get any flies, there is seasons for them…so I got a lot of locusts from Africa thru the net, referencing the 10 biblical plagues that smashed the Egyptian utopia, and maybe the succubus I viewers. The insects became the directors, teasing a lot of unfiltered expression out of Ziggie, away from a fashion pose, from scared to hypnotized to horny. She is a yogi, and Im so impressed, I would never go naked with these bacterial biters,  All utopias, even a beauty on an Island, turn bad, and the insects are hungry buggers, so I builded a flame-thrower for Ziggie, but due to her buddhist convictions, restrained, in her leather shoes. They are considered a delicious snack in Africa, but she wouldn’t eat any. There is some bad karma here, I had the smell in my head for weeks after the proceedings. And nigthmares.

The film is maybe a nod to danish pop artist Hans Henrik Lerfeldt, who was buried in a piano, but also an unconscious attempt to go into or mock the lineage of danish animal killing artists, (all inspired by Jean Tinguely´s  unintentional bombing of a peace dove at Louisiana in 1961). Queen favorite, art professor Bjørn Nørgaard slaughtered a horse as a Vietnam protest at the same spot 10 years after, then Lemmertz, Evaristti and Brammer followed suit, all headlining mainstream media for killing animals in a country that kills 7282 million pigs every year. I always wanted to take the danish national bird, the white swan, and let it live in a slow motion filmed environment eventually stepping on a mine, made in Denmark. Or something with frogs. I left a family of locusts at the aquarium, and hope they breed like hell, I love the idea of right animals in wrong places. I want to fill the Copenhagen parks with beavers and flamingos.

Video art will rise as a marked in the future, just like photo did. And all my friends have a lot of ugly screens next to their paintings, why not have something exclusive  outside the traditional narrative formats of film/tv as a living, moving painting? I edited it so it can loop endlessly, and can functions as ambient background or like an object for meditation. The soundtrack is based on samples of nice sounds like cats purring and champagne bobbles. 3d field recordings of insects mixed with drones from a modular analogue synth, but I carefully avoided making “music”, its more a hyper-field-recording-animation, complete with subliminals and ultrasound, look at your animals during playback….when Ziggie jumps up swinging her tits banging on the glass, the sounds are a basketball match edited into a complete illusion. There is in fact no actual live recordings from the set, just 23 tracks from synths and samplers. At a low volume its pleasant, but probably harmful on a loud PA system.

You can buy a unique long edit in full 1gb per minute ultra-HD version on a hard dive with a proof of autentic signed by the artist. This unique 1/1 file will never go on the net, unless the buyer wants to. You cannot buy Ziggies underwear, or Ziggie. An edition of prints is available on request as well. The short low-res promo version on the net is funny in the way it appropriates the stellar Dairy rooster, putting my name in a context on par with the creme de La crème artist-brands…Morten Vammen, Haim Steinbach, A Wei Wei…etc..haha.

Maybe it sounds like I make art as a puzzle, a calculated strategy or a rebus, but I rather see it as a more intuitive magical operation, reaching for the transgressive — utopic — void thru the process and in us al. That could explain the red herring of a mutant, the black egg and the ear…it..as always…are in your mind, and up to you. Enough pretentious theory mockery for now! Enjoy the promo here.